On 1 November 1918 Rudolf Maister, commanding 150 men, seized military power in Maribor. He declared Maribor a part of Yugoslavia. Also on 1 November 1918, the National Council for Styria appointed Maister a general, to give him greater authority in further negotiations with the Austrian army.

Maister’s call for mobilisation on 9 November 1918, on the basis of which the Maribor Infantry Regiment and the Celje Regiment were established on 21 November 1918, was crucial for the establishment of Slovenian rule in Styria. In mid-November, the Trieste Battalion was formed. Maisters army was funded with two million kronen from the Mariborska posojilnica (Maribor loan bank). Franjo Rosina, the bank’s president, justified the decision thus: “This is Slovenian money; if it helps us save what can be saved, then it is only right, if not, then we disappear along with it ….” On the night of 23 November 1918, they disarmed the last German military formation, the Schutzwehr, which numbered about 1,500 men.

Soldiers led by General Maister formed a demarcation line between Radgona, Šentilj v Slovenskih goricah and Kozjak, between German Austria and the State of Slovenes, Croats and Serbs – Battle for the borders – Styria. Maister participated in the work of the boundary demarcation commission. His wife Marija, who was also the president of the Women’s Association in Maribor, played an important role as a translator.

After the loss of Carinthia in the 1920 plebiscite, Maister returned from Belgrade to Maribor. On 2 October 1923, he was forced to retire with the rank of divisional general.

He was culturally and socially active throughout his life. Even after his retirement, he devoted his public activities to documenting and objectively presenting military and political events in the decade 1912–1922. He kept in touch with his former fighters and collected material for his memoirs. In 1924, he began to collect data on the military and subversive movements of 1918 and 1919 in an academically professional manner. To this end, he compiled an extensive and thorough survey questionnaire and distributed it to all participants and witnesses. Maister headed his last major public event in Maribor in 1928, on the tenth anniversary of the liberation of Slovenian Styria and Carinthia. He chaired the preparatory committee and was the keynote speaker. In 1933 he was proclaimed an honorary citizen of the city of Maribor – Decorations and recognitions.

He was always a tireless supporter of art and cultural events – Poet, bibliophile, cultural worker.

Maister died on 26 July 1934 at Unec. The next day his body was transported to Maribor. More than 25,000 people came to pay their respects to the general, with more than 10,000 mourners attending the funeral. A special funeral committee headed by the mayor, Dr Lipold, was set up. They issued a proclamation announcing the funeral ceremony and called on the city to mourn the General. Maister was buried in the Pobrežje cemetery in Maribor at the expense of the municipality. 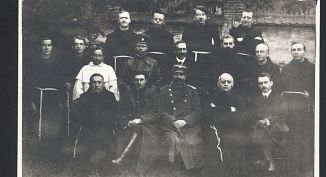 General Maister with the Maribor Franciscans on 24 April 1919, sitting in the front row, third from the left; kept by the PAM. 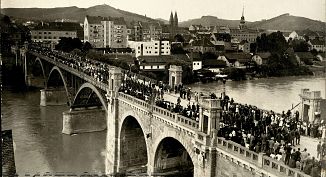 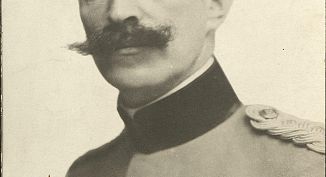 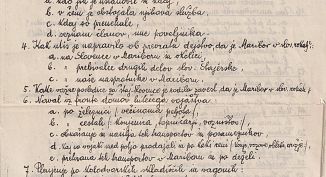 A questionnaire that Maister used to aid him in collecting material for his memoirs; kept by the PAM. 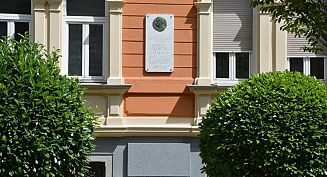 House with memorial plaque at Maistrova 17, where Maister lived before his death; kept by the UKM. 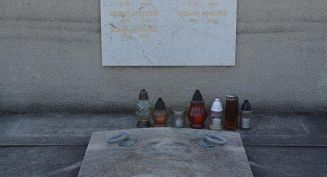 Maister family tomb at Pobrežje in Maribor; kept by the UKM. 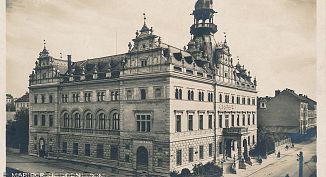 The Narodni dom in Maribor, where on 26 September 1918 the National Council for Styria, which conferred the rank of General on Rudolf Maister, was estabished; kept by the MNOM. 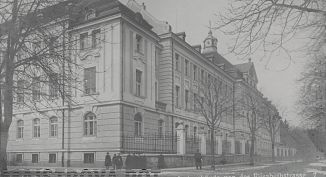 Seat of the district board in Maribor and of the Styrian border command; kept by the PAM. 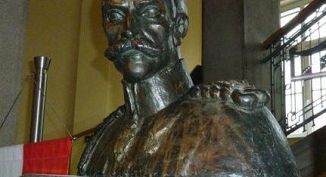 Nikolaj Pirnat's bust of Rudolf Maister in the entrance hall of the Maribor Town Hall, 1926.
Skip to content