From cadet to general

Rudolf Maister’s military career began in 1892 with his enrolment in the Landwehr-Kadettenschule in Vienna. On 1 September 1894, he officially became a cadet and was assigned to the 4th Landwehr Infantry Regiment.

On 1 November 1895, he acquired the rank of lieutenant and on 1 May 1900 the rank of first lieutenant. In the officers list for 1902 and 1903, he was listed as a first lieutenant in the 27th Landwehr Infantry Regiment in Ljubljana, and in 1908 he was disciplinarily transferred to the 18th Landwehr Infantry Regiment in Przemyśl. On 1 May 1910, he became a captain and in 1913 the commander of the Landsturm outpost in Celje. In 1914, he was assigned to the Landsturm district command of the 26th Landswehr Infantry Regiment in Maribor. In this position (Lst Bezirk Kmdo Nr. 26) in the Landswehr Infantry Regiment, renamed the 26th Rifle Regiment, he reached the rank of major on 1 May 1917 and still held it at the end of WWI. In the Official Military Gazette of 28 November 1919, he is recorded as a general and on 24 June 1920 an honorary adjutant with the rank of general of the army of the Kingdom of SHS. At the suggestion of the Minister of the Army and Navy, he was appointed commander of the military command of the city of Maribor on 29 July 1920. On 17 November 1921, he was assigned to the command of the 4th Army District. On 4 October 1923, the newspaper Slovenski narod informed readers of the order to retire General Rudolf Maister. Rudolf Maister, as a retired division general in the reserve army of the Kingdom of Yugoslavia, died on 26 July 1934 in Unec near Rakek. 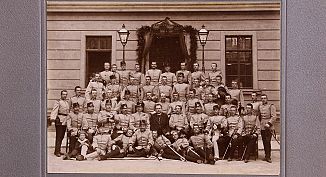 Boarders of the Landwehr-Kadettenschule in Vienna at the end of their schooling, 1894; kept by the Maister family. 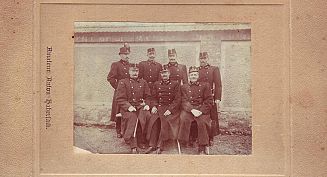 Landwehr officers with Rudolf Maister, circa 1900; kept by the Maister family. 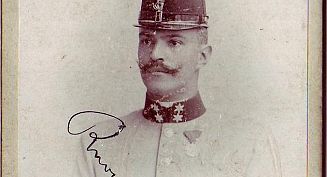 Maister as first lieutenant, 1907; kept by the Maister family.
Skip to content