According to information from the death register of the Mengeš parish, the Maisters moved from Kamnik to Mengeš in 1876. On June 1 of that year, Rudolf’s eldest brother Artur died in Mengeš. The second date, testifying that they came to Mengeš in 1880, is recorded in a document sent by the management of the Mengeš state primary school in 1935 to the Banovina archivist in Maribor as an archival copy of information on Rudolf’s schooling. Until 1883, they lived as tenants in a house locally called pri Gabru, with the address Veliki Mengeš 70. The house is still standing today, it is a protected historic building. While the roof has been slightly altered, the entrance portal, bearing the initials of one of the owners, the year 1872, when the house was built, and address, Veliki Mengeš 70, is well preserved.

Rudolf Maister started primary school in Mengeš at the mežnarija (sexton’s house) – which still stands beside the parish church of St. Michael – in 1880/81 – Education. 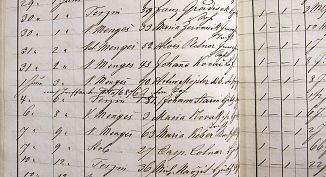 Extract from the Mengeš death register 1956–1881 on the death of Artur Maister on 1. 6. 1876; kept by the Archiepiscopal Archives of Ljubljana. 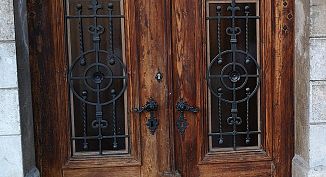 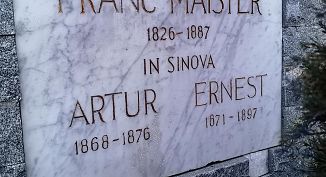